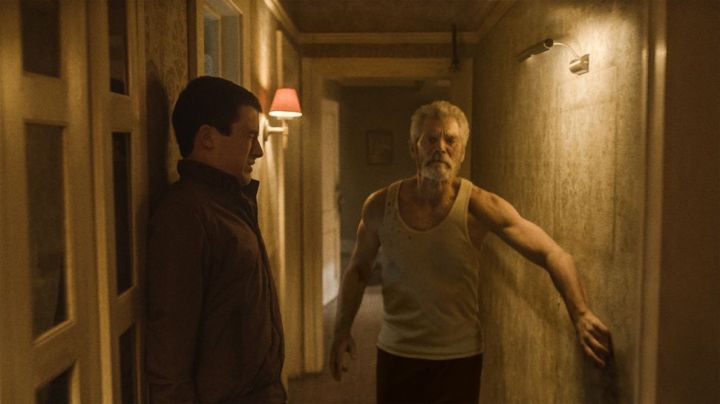 When I first heard the concept of Don’t Breathe, I thought the film was going to suck. I expected a poorly written story with few scares, little tension, and nothing to keep the audience entertained. Just as so many horror flicks nowadays are, I thought Don’t Breathe was going to be a huge disappointment. Director Fede Alvarez (the Evil Dead reboot) sure proved me wrong. Don’t Breathe is an entertaining horror film written and directed by people who knew what they were doing.

Don’t Breathe stars Jane Levy as Rocky, a young girl living in Detroit with her sister and neglectful parents. Rocky dreams of moving to California with her sister, leaving her careless parents and troubled life behind. To make this dream possible, she breaks into and robs houses with her boyfriend Money (Daniel Zovatto) and close friend Alex (Dylan Minnette), whose father owns a popular security company. The next home they decide to hit is owned by a blind veteran, who is said to be hoarding over three hundred thousand dollars somewhere in his house. Once inside, Rocky and her friends find that the blind man may not be as harmless or incompetent as he seems. Now locked in the house, Rocky must now find a way out before they are killed.

What I loved most about Don’t Breathe were the camera angles, as well as some of the shots they took. One shot in particular I liked was the tracking shot of the house when Rocky first breaks in. The camera slowly reveals the layout of the house, as well as showing the audience particular items that come into play in later scenes.

The filmmakers managed to make me feel desolate, as if there was little chance that the protagonists would make it out. I consider this a major plus, as the idea of being locked in a house with a blind man initially doesn’t get my heart racing. Fede Alvarez makes this work much better then I could’ve imagined, as escaping the creepy house comes rather difficult for the somewhat competent protagonists. I found myself exhausting my own list of ways the characters could escape the house, all with no luck.

I feel the best part of Don’t Breathe was the second act, where our main protagonists are trapped in the house with the blind man. That was when the film was most exciting and entertaining to me. It kept me on my toes and guessing what was going to happen next. Which corridor would the blind man be at? What frightening things could the blind man be hiding in his home?

The third act is somewhat of a retread of plot points I’ve seen in other modern day horror films, so I found this a little more predictable and boring than any other points in the film.

The film also does a pretty good job at building up suspense for the audience. I’ve always preferred scares that have a lot of build up with a good payoff to that of jump scares, and the film somewhat delivers on that. There are jump scares riddled throughout, but the visuals and camera work do such a nice job at setting an eerie mood that I remained creeped out for a good part of the film.

Don’t Breathe is a horror fans movie, and those with an appreciation for great camera work should look no further. In an age where it’s hard to find even an entertaining horror flick, let alone a good one, Don’t Breathe is a reminder that well-made horror movies can still exist.