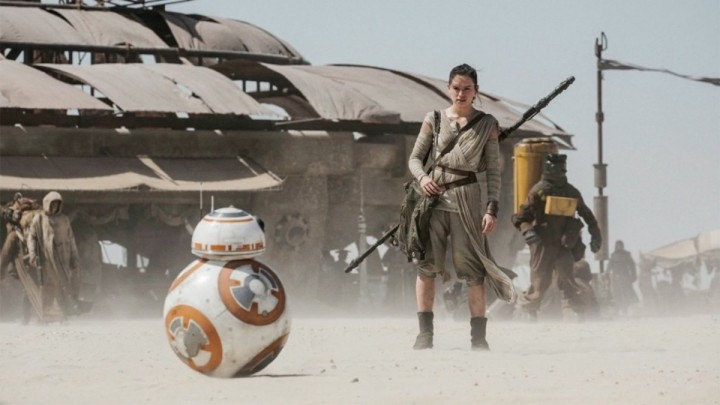 Star Wars: The Force Awakens serves as the welcome home of an old friend we used to know and love. It is the crème de la crème of J.J. Abrams work and his stylistic brilliance matches perfectly with the magic of the Star Wars universe. I spent every minute of this film waiting in anticipation for what would happen next.

The Force Awakens takes place 30 years after the destruction of the last death star. The galaxy is now ruled by the villainous First Order, led by Kylo Ren played by Adam Driver. The First Order is searching for a droid that holds a map with the location to Luke Skywalker, who had vanished long ago. The droid eventually becomes acquainted with a scavenger named Rey (Daisy Ridley) and an ex Stormtrooper named Finn (John Boyega). The three voyage together and attempt return the map to The Resistance, who oppose the First Order. Along the way they come across some familiar faces. Including both Han Solo (Harrison Ford) and Chewbacca (Peter Mayhew), who join Rey and Finn on their quest to return the droid.

The film climaxes with an intense space battle between the Resistance and the First Orders new super weapon, and a brilliantly choreographed lightsaber duel between Kylo Ren and Rey taking on the position of the new Jedi apprentice.

There comes few weaknesses to a story so finely crafted and so strongly acted. The amount of hard work and dedication put into The Force Awakens by everyone involved is self-evident, and it all pays off. Many of the effects are practical, the dialogue enjoyable, the writing as good as ever, and a wealth of great acting.

I was however disappointed in the utilization of the computer generated images. It was extremely easy to pick out what creatures were real and which were not. Perhaps this was due to how well the costume designs and makeup effects were done, and the CGI was just naturally conspicuous. Each monster in the film has their own unique characteristics that help to expand the audiences understanding of the universe in which Star Wars exists. There is even a Cantina styled bar sequence that reminisces of the past with just as much creative design in characters.

It’s also no secret how The Force Awakens completely mirrors the plot of A New Hope. This is something that did not sit well for some viewers, feeling that taking from the plot of A New Hope cops out on creating something new and original. I felt somewhat the opposite. Seeing a completely new story I am sure would have been great. However we did not necessarily need a completely new story because we first needed the assurance that a ‘Star Wars’ feeling movie could be made once again. All three of the Star Wars prequels hardly felt like  ‘Star Wars’ movies and left vast amounts of people disappointed. So Abrams had to test the waters a bit and play it on the safe side by borrowing from A New Hope. Now that fans know what a Star Wars film feels like again, future installments can freely mix it up.

The Force Awakens being such an epic, grand scale film comes at a price. With so many profoundly crafted scenes to fit in to just one film, some characters (such as the Stormtrooper Captain Phasma) do not get much needed focus and some scenes do not get explained enough.

There is a great speech made by General Hux of the First Order just before he gives the signal to eradicate the Republic. The monologue is very compelling and well written and seems to unbeknownst to itself or the audience mask the question of, why blow up the Republic? We know they are the enemy of the First Order and continue to plot against them by funding the Resistance, but surely this plot detail could have been explored much more.

Despite the nitpicks and flaws, The Force Awakens spectacularly breathes new life into the Star Wars franchise and leaves me in anticipation for the next film in the series. It’s fast paced, rich in story and character, and reminds me of why I love Star Wars in the first place. Star Wars fans old and new will be able to come together to enjoy this adrenaline pumping, nostalgia inducing flick. Let’s hope that just as much love, care, and effort will be put into the next installment.

One thought on “Star Wars: The Force Awakens Review”