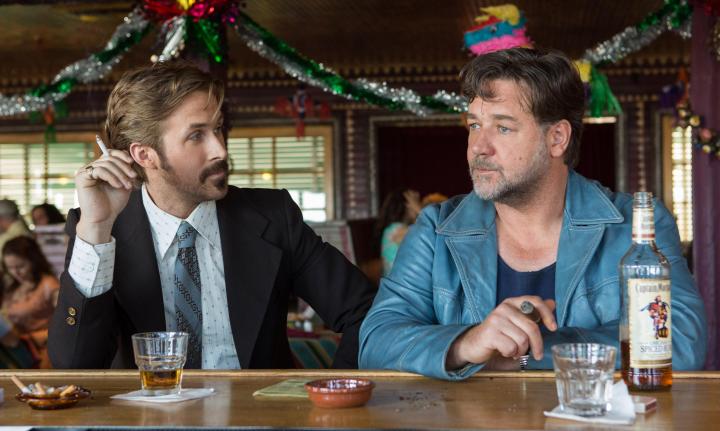 Russell Crowe and Ryan Gosling are the Nice Guys, however their behavior onscreen would have me arguing otherwise. They are rude, crude, and have very little decency, yet both their characters still come off as likable. Crowe and Gosling are a great on screen duo and naturally work well off of each other.

Filmmakers worked with this buddy comedy/ film noir genre to their advantage. The script is well written and the characters are sharp and interesting. The story and setting reminds me a lot of the 1997 film L. A. Confidential, just with more humor. The mystery to the story is solved about two thirds into the film, with the last third being a climax that will satisfy plenty of viewers.

They fire off jokes often throughout the film, with many getting big laughs. The bickering that goes on between Gosling and Crowes’ characters is great. It’s nothing new for a buddy comedy duo to argue, but the expressions and tone of voice they give in their performance while arguing is a marvel.

The best jokes in The Nice Guys come from the most unexpected moments. When something you could’ve never imagined happening in the film, happens. One character splashes hot coffee onto the villain, only the coffee is actually cold. Viewers will get a laugh out of this, but get an even bigger laugh a few seconds later when the villain slips on the cold coffee and is knocked unconscious. I found this very funny and an unexpected turn of events.

Gosling’s character is by far the funniest part of the film. The shtick that he pulls at times feels like an Abbott and Costello sequence, with Gosling as Costello. At one point in the film Gosling comes across a dead body while very drunk, and his reactions to this discovery are something that would make Lou Costello proud. Full of frantically pointing his finger and breathlessly murmuring incoherently.

I feel like some of the conflict and problems that the writers tried to build with Crowe is over done in films and was unnecessary to the story. This is more of a small gripe if anything though.

I don’t believe I fell in love with this film as much as other critics did. Seeing that it currently has a very high Rotten Tomatoes score of 90 percent. Not to say it wasn’t a good movie, with a well-developed story and respectable actors. I just feel it was a standard neo-noir film with some good action and funny characters. It is nothing anybody has not seen before in any other neo-noir or buddy comedy.

I recommend The Nice Guys to anybody who has a respect for film noir, or anyone who would like a good laugh from a comedic duo.